My time with the Australian Ninja Warrior application process. 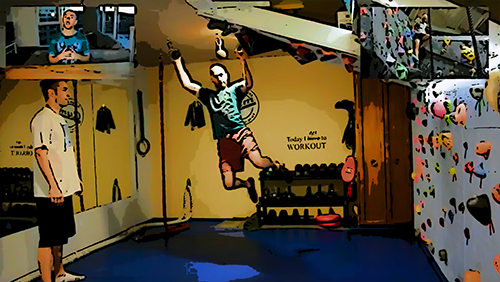 The application process for AusNW has been totally interesting and I wanted to share my experience with it so that;

There is always so much secrecy about these things, and I’d love for a heap of people to chip in… to reduce the secrecy and loneliness these things create, and help improve our perceptions about what we’re signing up for. It’s easily to see all the competitors as our competition… but that’s not the case… it’s us versus the course. The further one of us get, the further all of us get. Together we all improve.

So, how did it all go down for me?

I started my application on the first day it opened… and my first act was to send an e-mail to the casting team asking when entries closed so that I could plan it all out.

I actually got two e-mail responses from two different casting team members confirming the deadline, and next time I checked the website had been updated.  Super responsive, top effort dudes!

The application process was tough, it pretty much asked questions on everything… and you can tell from the questions asked that they’re trying to work out the most interesting story to tell about you.  This is a really important point, and really shapes the entire application process.  All other obstacle races and comps and challenges, it’s all about how good you are…. Ninja Warrior isn’t like that at all.  It’s all about how entertaining you are to an audience. Everyone jokes about how you have to cry to get on dancing or cooking shows, but that’s the mindset you have to have… you might be the best in the world at all obstacles… but if you don’t have a good story you’ll never get on.

I didn’t tackle my video straight away, cos I honestly didn’t feel like I could do anything strong or interesting enough yet.  Eventually someone from the casting team e-mailed me and encouraged me to finish it.  I’ve heard from a couple of other people that most people got some prompting.

The casting team were encouraging completion because I was later to learn that casting unofficially closed a week before the deadline… they had more than enough entries by that point.  So, get ’em in early next year peeps.

It took me another two weeks to finish my video because I wanted to include some footage from a Ninja training gym in Chicago. The actual editing probably honestly took me about 40 hours… everything always takes longer than you think.

I submitted my finished application on the 17th of August 2016.

The deadline was 5pm 9th of September.

I emailed the casting member that was prompting me, and she e-mailed straight back saying that she saw it already. I really have to say the communication from the casting team was absolutely fantastic in this part of the process.

On the 31st of August I emailed them again to check, I was getting nervous about flights knowing that the trials would start in Melbourne around the 15th.  They e-mailed straight back again asking to be a little more patient since the they were still receiving applications.

On the 8th of September, 11pm my time (I was in Chicago), 2pm Sydney time on the 9th of September, I got an e-mail inviting me to the Melbourne trials on the 15th & 16th. I rang them straight away to tell them I needed to ask permission from my boss to fly to Australia but unfortunately, they needed to know in the next 3 hours. Work was actually crazy busy at that time and I didn’t feel right about just bailing on everyone, even though I really wanted to be on Australian Ninja Warrior.  I didn’t know what to do… there was only 1 or 2 spots left for trials and they couldn’t hold it for me, they had to have it locked in there and then.

Talking to an Executive Producer, we kinda decided to put me on a standby list and skip trials… but this meant that I’d only be considered if they couldn’t fill their roster… which seemed unlikely.  They said that they had thousands of overseas applications so I felt like I was doing well to get this far.

Luckily, the casting team chased up my cause with the main producer, and they offered me a Skype interview instead, an absolutely great outcome for me, especially since peeps in America only get two weeks leave a year and I’d rather use that leave for filming Australian Ninja Warrior or American Ninja Warrior and not the trials.

Then I checked my phone incessantly (although, I had already been doing that since I put my application in) and I sent them a reminder on the 16th, they replied on the 19th saying they’ll contact me later. I sent another e-mail on the 30th and then it was full on action stations and we got an interview organised for the 4th of October.

On the 4th, they had finished the 5 lots of trials around Australia and had all the information of all the applicants and were figuring out who all fit best.  My Skype interview didn’t go that well I felt. It was with the main Producer, who was absolutely lovely, but I could tell she was really only listening for key words. If I said something interesting she’d write it down and if I didn’t she’d move onto the next question. She didn’t really know my story and was kinda trying to fit me into a particular box that I’m not sure I really fit into.  I didn’t leave the interview feeling confident, but you never know right?

She said I’d be contacted by the end of the week with an answer… and to their credit, I got an e-mail at the end of the week saying they had had some technical difficulties and would let us know by 5pm on Monday. I have to say I really admired their communication throughout the entire process.

I’m probably about 24 hours away from finding out.  I’ll be stoked if I make it, but totally fine if I don’t. Training with these hardcore peeps in the US has made me realise that my training still has a long, long way to go.  I’ve been training specifically for the show for months… but I now think the better approach would have been to compete in obstacle course stuff, and get so good that only Australian Ninja Warrior was the only remaining challenge.. then I’d feel confident.  Feel totally underdone right now, but since we have no idea what we’re up against, I might be okay…

How did you go with the application process?  Anything you liked or disliked?  Feeling nervous or confident?

Let me know in the comments below.