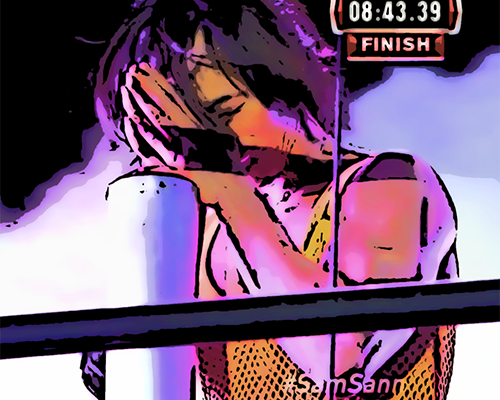 I’ll admit… I was completely star-struck, right up until he said the words “Today is gonna be tough, it’s going to hurt.”

I’d be training obstacles the last two nights, and I was already sore but I was only in Houston for the weekend and couldn’t pass up an opportunity to be trained by American Ninja Warrior great Sam Sann at his Ninja gym IronSports. 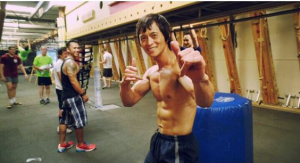 I’d heard that Sam’s training sessions were rough, but he often divided the group into mini-teams and had them compete in mini-relays which sounded super fun and right up my alley…. unfortunately, that was not at all my experience.

The warmup was to run about a kilometre, and then we proceeded to spend the next 20 minutes doing pull-ups and burpees.  20 minutes! It was hardcore… here is the proof:

I got through about 160 burpees and pullups, but I’m pretty sure Sam who is well over 10 years my senior punched out over 200, even after starting late and spending heaps of time encouraging everyone.

We then spent maybe 10 minutes/years doing farmers walks with heavy weights. When you could no longer carry the weight, you could rest by doing 10 squat jumps.

Afterwards we grabbed 10 pound weights and did a whole series of shoulder presses, bicep curls, etc etc… basically we weren’t allowed to lower our weights for ages and ages.  I have no idea how long this was, I was in hell.

After that, we spent a heap of time doing ab stuff, again, a series of 60 second exercises with no rest in between.

The group was probably about 20 strong; a heap of the young dudes that work at the gym, about 7 mums and a couple of randoms like me.  The young dudes are in incredible condition, and can do crazy hard jumping spider obstacles backwards, but they spent a lot of time complaining and trying to get out of all the exercises. The mums all just soldiered on.

At first I was kinda angry with the workout… I could do situps and bicycles and pullups anywhere, there were a trillion obstacles around us that we weren’t even using… but watching everyone else I realised that physical toughness and mental fortitude are probably more important in getting through a course than flash ability. I’d been going about my training the wrong way.

The image at the top of this post… Sam was grinding out every step of the American Ninja Warrior regional qualifier’s course for just under 9 minutes. He’s nearly 50, he would have been in huge amounts of pain almost that entire time… but he totally made it to that buzzer… because of workouts like this. The shoulder presses, every single person struggled but Sam totally didn’t flinch.

My point is, we all get distracted by the obstacles… and yes, technique behind salmon ladder and warped walls is important, but being tough and strong is so much more important.  Get hurtin’ peeps.