The Compound Ninja Round 8

It seems pretty unbelievable that in February of this year The Compound Training held their first ever Ninja Warrior competition and now at the end of October, the monthly ninja series that spawned from that event is over. 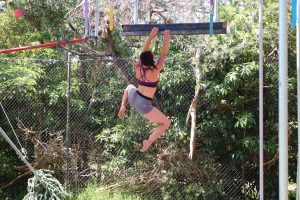 Ninjas from all over Australia have tackled 8 different courses. Veterans from Australian Ninja Warrior season 1 have gone from strength to strength, while newcomers to the sport have blown everyone away with how fast they’ve progressed.

This month’s Compound event was one of the biggest turnouts they’ve ever had both in competitors and crowd.  They all chose a great month to come because the ninja course was as fast as it was difficult with a slightly different course for both the qualifying and finals rounds.

The course was made up of the following obstacles:

There was a 2 minute 30 second time cap on all runs and in qualifying you could fall off 5 times and return to the start of that obstacle, however in finals if you failed any obstacle you were out. 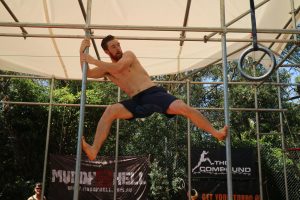 Shaun Brien (me) on the Pole Grasper

I’ve gotten into the very terrible habit of always being incredibly early to Compound Ninja events (a side effect of living 2 hours away).  The reason this habit is terrible is that often the running order is decided by order of arrival, so yours truly was suddenly in the first heat to run the course.  Running against me in heat one was the tenacious and lively Tamara Lee Caspers who only competed for the first time last month, but based on her natural skills you’d think she was a veteran of the sport. 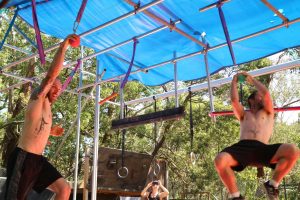 Michael vs Neal in the closest race of the day.

I’ve tried to get in to the habit of not really practicing on the Compound’s course too much before competing on it (in the off chance I ever get to run the Australian Ninja Warrior course) and today that really led to my downfall.  Looking at the course, they were all obstacles I had completed before and felt quite comfortable with and the start of my run really showed that as I cruised through the first few obstacles (including the Pole grasper which is my personal favourite) until I got to the end of the ring toss and had to reach up and grab on to the cliffhanger. 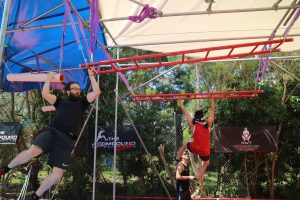 As I put my hand into the ledge above me, I realised it was shorter than the cliffhanger we’d used in previous competitions and I wasn’t at all prepared for that.  Suddenly, I couldn’t work out how to hold my body to take my weight and I came falling down off on to the crash mats.  I still had time so I tried again, this time trying the ‘swinging monkey’ technique on the ring toss to save energy, but I had the same result.  Sadly, the exact same thing happened again in the finals and I wasn’t able to finish the course.

If you’re anything like me and there’s been a single obstacle that’s brought you down in a competition you’d know that afterwards you can become totally obsessed with it! Now all that I want to do is practice finger strength on campus boards and cliffhanger rails just in case I have to face it again in future.

Some of the highlights of The Compound Ninja Round 8 included: 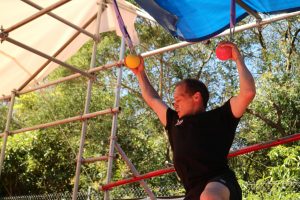 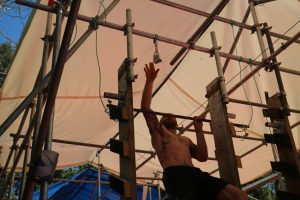 At the end of all of these Ninja events, the champion of all 8 rounds was crowned.  Surprising nobody, Dan Mason the ‘barefoot ninja’ was crowned the champion both on the best 4 scores and the total accumulated score for the 8 rounds.

It’s going to be a long wait for all of the Victorian Ninja’s until the next event in February 2018, but I can’t wait to see what Clem, Allyson and everyone else down at the Compound has in store for the 2018 season. 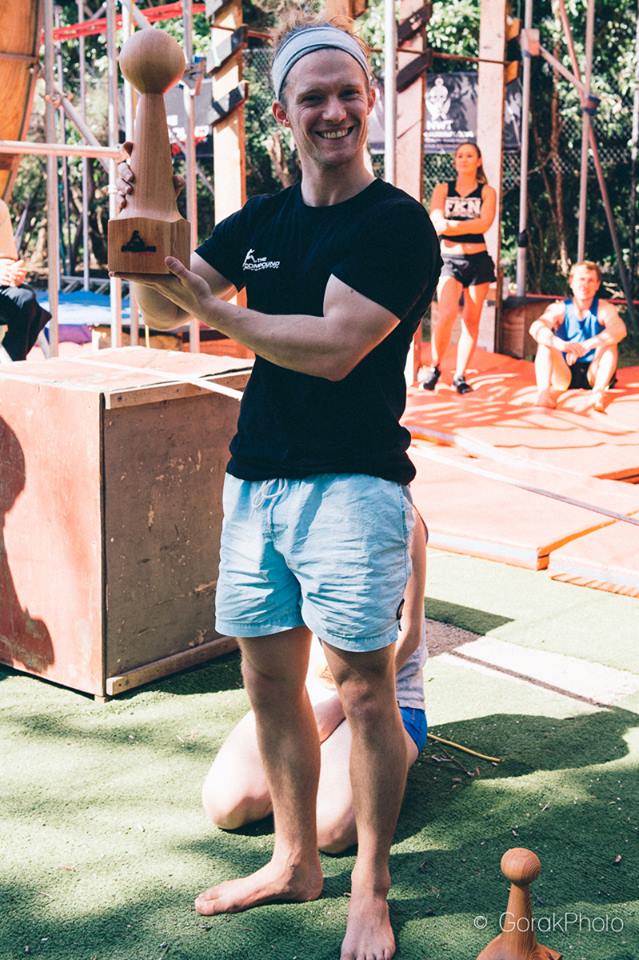 Dan Mason crowned as Champion of the Compound Ninja