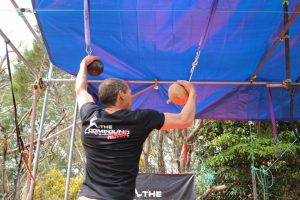 How time flies. It was already time for the second last Compound Ninja event for the season.  It seems like the first ever ninja competition there wasn’t all that long ago and here we are almost wrapping up the year. In that time in Australia ninja warrior has gone from being a relatively unknown quantity to being a national phenomenon and the community has grown along side it.  It’s honestly remarkable to see how far some of the guys and girls in the community have come in just 12 months.

But I digress, you’re here to read about the challenge and excitement of September’s Compound Ninja, which was held on the 1st of October on a day where the weather could only be described as ‘Melbourney’ (for those of you out of state or overseas, that means fleeting moments of sun, followed by wind and rain, followed by blue skies and sun, repeated throughout the day).  Today I had the pleasure of driving in to The Compound with a newbie to Ninja Competition, but someone with a great deal of natural skill Michelle Callanan, a 41 year old mother of 2 who can do things on the Ninja course that most 40 year old women wouldn’t even consider possible.  Her giddy child-like excitement made for an entertaining drive in and made the 2 hours fly by. 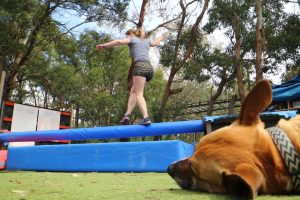 The Compound Doggo Narlee, once again unimpressed by Ninja Action

In the hopes that I one day get to compete on Australian Ninja Warrior, my current approach to these competitions has been to not even see the course until the day (in prior months I came in once or twice to practice the route).  I figure this helps replicate the pressure that would exist on the show and see how I can preform in unfamiliar situations under pressure and the pressure was real once I saw the course set up for this month.  The course was as follows:

This course after the first two obstacles was a true upper body grip destroyer with the Big Ring Swinger being the major Ninja Killer for the day.  There were 22 ninjas rounding out the field in this months competition, with a record number of females taking on the course which was incredibly to see their determination and grit on the course. 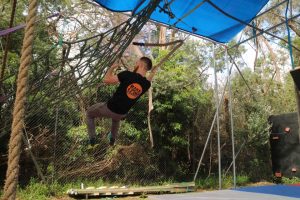 I believe I was the 4th or 5th run for the day, and as has become custom rather than warming up I spent all of my time trying to take action shots of the ninjas running the course.  First up was the quintuple steps, which I’ve never fallen off, and still have not.  Next up was Clem’s new and improved rolling log, elevated off of the ground and set up to look just like the one seen on Australian Ninja Warrior.  This was an obstacle that was both intimidating and deceptively difficult with many different approaches to conquering it seen throughout the day.  My slow and steady sideways technique might not be the most flashy or fastest, but it got me through without falling and that’s all I can hope for.  Then the rope slider to cargo net, for those of you following my journey from nothing to ninja you may remember my problem in last months competition where on a similar obstacle I missed the grab on the cargo net and was left swinging like Miley Cyrus on a wrecking ball. Not this month though, this month I got a firm grip on the cargo net and climbed under it as quickly as I could (I was deeply paranoid of falling after fellow ninja Kyle Creek had a shock exit on this obstacle as his foot touched the ‘water’).  After this was the pole grasper, 4 poles of varying distances apart. This is actually my favourite obstacle thanks to my long legs and arm span, meaning I made relatively quick work of it (although not quite the single armed monkey swings Jaze Dubois pulls off on them). 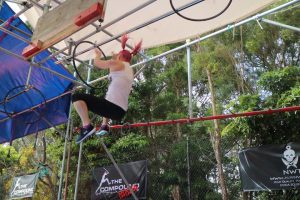 In my mind, I was already a winner because my goal was to get to the big ring swinger and I had no idea how I was going to go on this obstacle. It involved 4 large steel rings of varying distances apart which were not fixed in place, so if you didn’t keep you swing straight you could totally end up hung up swinging sideways.  Not only that, the gap between the first two rings was around 2 metres (Which could be greatly reduced with a good swing), but when you’re up there hanging it seems even further.  The key to this obstacle is that once you make the first transfer you do not stop, because if you do, you’ll lose all of your momentum and then it’s almost impossible to recover.  I jumped up to the ring completely unsure if I could even make the first transition.  I kicked up to get a good swing, went back and forth to build momentum and then on the 3rd swing I could actually feel that I had the momentum I needed to reach the second ring.  I led out with my left arm and got a firm grab on it (and in my head started losing my mind with excitement), then I swung and grabbed the 3rd ring, then what I should’ve done is pull back hard on the 2nd before letting go.  What I actually did was just let go and lost all of my momentum and ended up hanging dead, so close to the end of this obstacle I didn’t even think was possible for me.  So I failed and came off, but I came off having a pretty massive mental win for the day. 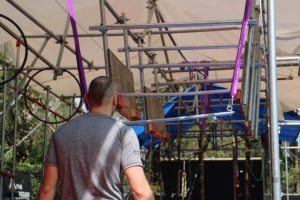 Up and comer Simon Paini staring down the Bar Hopper

Throughout the day there was some amazing shows of talent and ability by the fellow ninjas, if you don’t follow him already, Leonard Hermawan is a ninja to watch because every month he is getting better and better and soon he’s going to be winning competitions where ever he goes.  Dan ‘Barefoot Ninja’ Mason won the day with a flawless and fast run which protected his spot at the top of the leaderboard.  With only one month to go it’s going to be great to see how the Compound Ninja series ends for 2017.  With next month being one final and fast head to head round it’s going to lead to some exciting battles between this growing ninja community.

Levelled up this round #Lion vs #CompoundNinjaCourse !! Full on Awesome day with some Super Strong Ninjas !! Thanks Clem ⚔️ for hosting another epic event & Jaze 📸 for the Pro Filming Skills #trackbydjtactics #flight76waltermurphy #compoundninja #ninjawarrior

← Is the Ninja Community even all that special?
→ Damn you DOMS
Register or Login