Bombed outta 3 Ninja Competitions – What did I learn?

“For this obstacle you’ve got to get these rings up to this point here, and swing off past here…. alright, you’re up.”

If I was a cussing man I would have unleashed a storm of swears, instead, I was trying to take my jumper off and getting it tangled in my hat and glasses and suddenly very aware of whole warehouse of ninjas were watching me.

3 seconds later… I was out. 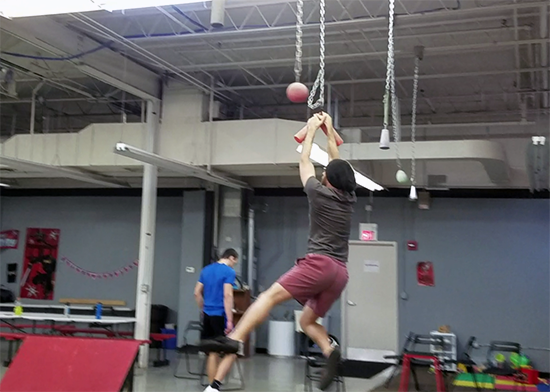 As much as all this hurts, let’s dissect:

Why did Gabe immediately launch me into the spotlight with 0 seconds to process the rules of 20 obstacles?  ‘Cos my flight was delayed for 2 1/2 hours and it wasn’t looking like I’d get to compete at all… I was luckily the very last person to run, the competition finished way quicker than the scheduled 8 hours because most people fell on the 2nd obstacle, the rolling log.  If my flights had all been perfect, I still wouldn’t have been really on time, but it was a risk I was willing to take to not pay for an extra nights accommodation.

The take away though, is that if something is important, then plan and prepare appropriately. Prepare for the worst. I only thought about the best possible case scenario, I was all ‘She’ll be right’ when I really should have gotten in way earlier and checked out the obstacles at the open-gym the night before.

Sprinting through airports, getting stuck in traffic, pacing during delays, losing your mind as a 90 year old couple chat to every staff member as they slowly block everyone to the plane, none of these things are good competition preparation. Prepare for the worst and you won’t be disappointed.

2.)  Balance obstacles really are the ninja-killers.

My 2nd competition, I breezed through the first two obstacles, and totally crashed on the balance obstacle. I nearly hilariously bounced my way to safety too, but it was not to be. This balance obstacle (it was 3 balls in tires with a rolling log separating) took out a heap of very strong, very competent ninjas.  In Fresno, I didn’t even get to the rolling log, but apparently it took out 80% of the competition.  We all need to be training balance way more than we think we do. 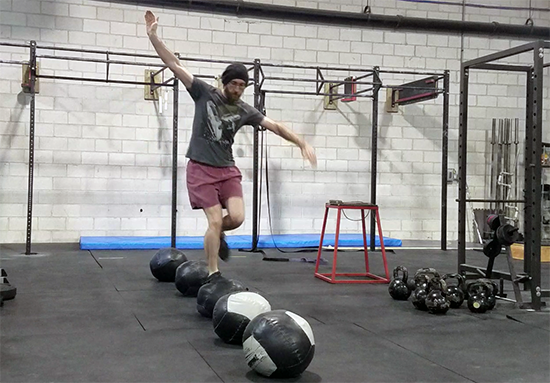 I’ve watched over a hundred people tackle these courses, and only seen a couple of people complete.  Everyone who I saw finished sailed through the majority on the courses barely breaking a sweat.  Make no mistake, the cumulative fatigue is hardcore.  I’m definitely adjusting my training to include more intense cardio, and stringing obstacles together, tackling obstacles when I’m already fatigued.  This has the added benefit of getting used to being devestatedly tired and still putting in the effort.  In at least 2 cases, only the finisher’s pure determination and will-power got them through, they were beyond spent. Where did they get that determination when his arms were burning and he had nothing left in the tank…. by spending hours training with burnt arms and lungs screaming for air.  Those hours helped him sail through the course and it absolutely helped him when the going got real tough. The most talented don’t win these competitions, the hardest working do. The guy who came 3rd actually went straight to the hospital because of the stress the course put on his body… but 3rd place gets him into the NNL finals, so I guarantee he’s happy he pushed himself.  I saw him 2 weeks later at Apex NorCal, he was fired up to do it all again.

There is so much glory attached to Australian Ninja Warrior, but to really succeed, there is hours and hours of boring “work”.  It’s so worth it though!  It is absolutely 100% worth it. 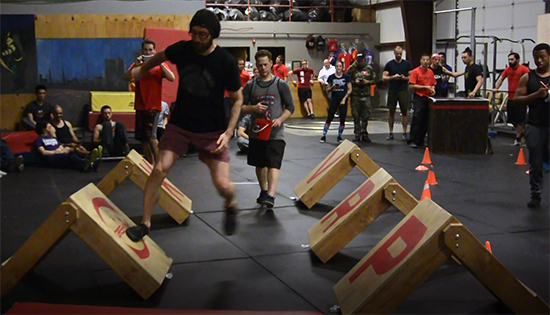 4.) Get used to performing.

The 3rd comp, I went out on the 2nd obstacle… the jumping spider which I’ve nailed so many times before and since.  I don’t really know what my problem was… I was all nervous and stressed and rushing and terrible.  I was the last competitor, so had so many nerves built up, hungry, busting for the loo, really wanted to beat my coach, really wanted a good run on video… I dunno, it was all in my head.  My big stupid head.  After I crashed, the organisers went away to tally the results, we could play and I did the first few obstacles so easily… once the pressure was off I was fine.  I don’t think it even matters on what sort of performance you do… whatever teaches you to calm yourself when you’re stressed.

I had every intention of linking my videos, but I just can’t… not yet..too raw…. maybe I’ll compile an epic #FridayFail or something.

Here’s some peeps that did them better: