The Compound Ninja Round 6 – August Wrap Up

This months Compound Ninja course was an absolute beast with a challenge set to competitors to make it as far in to a 21 obstacle gauntlet as they could within a 4 minute time limit. What none of the ninjas realized is that there was a secret 22nd obstacle which no one counted on, the weather.

The route for this round was as follows: 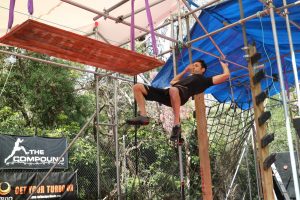 Luckily for Clem Vertigan, fearless leader of The Compound Training, the sun was shining during his run up first. He made relatively quick work of the course, flying through the obstacles like he built them himself (he did). Even with that inside knowledge and fine weather, time still ticked on and ended his run on the unstable boards.

During Nam‘s run up second, the Melbourne weather took a violent turn and suddenly he was completing the ring Toss obstacle while being bombarded with rain and hail. He valiantly fought on though, but the new wet warped wall was too slippery for him to complete. 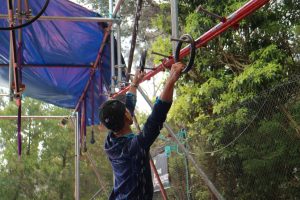 Nam battling rain and hail on the Ring Toss

This rain set a whole new range of challenges for all of the ninjas to come. The spider wall suddenly went from being a difficult but do-able obstacle, to an absolutely Ninja killer. Thankfully, Clem was a bit more lenient and didn’t count falls on the spider wall so that all competitors could have a fair run of the course, but from all accounts the cold and fear of slipping slowed a lot of ninjas down. Another new obstacle was created in the form of a dog named Coco, who decided she loved to chase competitors up the Warped Wall.

A new addition to the day this month was in inclusion of a running commentary by Jake Baker. This seemed to curse many runs because as soon as Jake mentioned how perfect someone’s form or run was going, something quickly went wrong. It definitely lightened the mood however and took everyone’s minds off of the inclement weather. 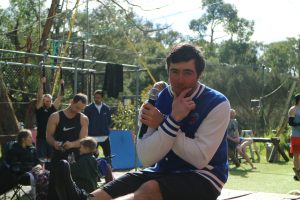 Thanks to the nature of running in reverse alphabetical order, my run was the 4th last run for the day.  Realistically this should’ve given me ample time to warm up and study the course and prevent makings the same mistakes as other ninjas.  What actually happened is I discovered the best technique for action shots on each obstacle and totally forgot about my eventual run.  That being said, in the 30 minutes of practice before the competition commenced I felt good, I ran through the early obstacles with no issue and decided that the later tougher obstacles could simply be an issue if I managed to make it to them during my run.

The countdown sounded and then I was off, through the quintuple steps without issue and straight into the spider wall.  At the end of the spider wall was a ledge which you had to lache around 1.5m to a mat and I was a little bit too enthusiastic with my swing and my fingers came right off the ledge.  “That’s alright though I thought, I’ve got 2 more falls”.  The next attempt I nailed it and went right on to the traverse wall.  In The Compounds first ever Ninja Competition I came off on this wall and I wasn’t willing to let it happen again today.  During my trip across the wall Jake Baker even allowed me to attempt to commentate my own run, however I was too focused on not falling to say anything witty. 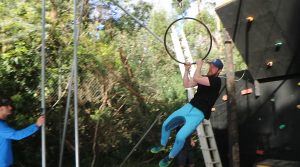 The moment before it all went wrong

Next was the pipe slider into the rope to cargo net.  I went smoothly down the slider and got a great grab of the rope, then a great strong pull back on the ring to gain momentum, I thought this was going to be a flawless transition, but as I swung to the cargo net I started spinning on the rope and missed the grab and then I found myself swinging back and forth seemingly endlessly ‘just’ missing the cargo net each attempt I made at grabbing it.  Almost a whole minute of my 4 minute run was spent on this rope, trying to get to and through the cargo net.  Eventually I managed to climb the rope and then climb from the highest point of the cargo net, all the way down and under.  If you’ve ever climbed under a cargo net, you’ll know what an energy sapper this can be. To get an idea of how I looked swinging on the rope, picture the Miley Cyrus, Wrecking Ball chorus. 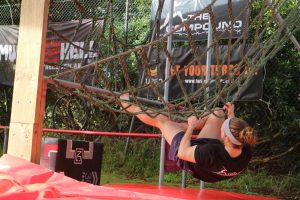 Dan Mason showing how the Cargo Net is really done

The next obstacle was the balance beam, which apparently isn’t an issue for me anymore because I just walked across calmly like I was on solid ground.  Then came the ring toss, not a difficult obstacle, but a definite energy sapper and at this point 3 minutes in to my run I could barely feel my hands from the cold.  Unlike others who swing through this obstacle as if they’re monkey bars, my lack of shoulder mobility means I must take them on sideways ring by ring, one peg at a time.  Not the fastest method of getting through the obstacle but it definitely is the safest.  At the end of this obstacle you must climb a pole up to Mace Alley and thanks to the rain I slid right down that pole and soon after my time ran out and my run was over.

Was it a pretty run? Not at all! Was I happy with my run? Absolutely! The greatest possible thing to come out of this competition for me this month was the knowledge that I’m able to keep calm under pressure and not give up.  This is probably a greater skill to develop than any grip strength or conditioning training as even though we may be perfect on an obstacle 99 out of 100 times in training.  That one time where it goes pear shaped is likely going to be when you’re in a competition.

That’s all for another month of The Compound Ninja. With only 2 months of competition left it’ll be interesting to see what new obstacles the courses bring and if there will be any shake ups in the leaderboard.  With Ashlin Herbert coming first this month, Dan Mason could have trouble holding on to his top place in these find rounds. 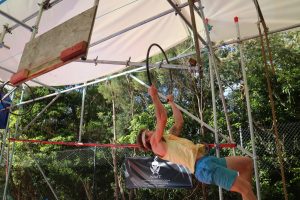 Ashlin Herbert on the Ring Hopper