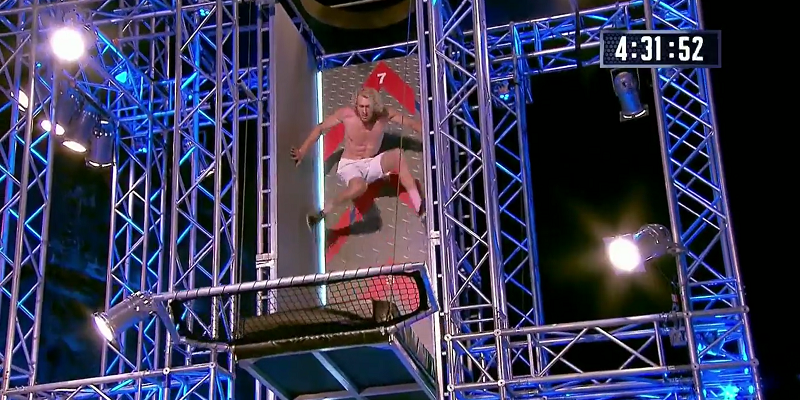 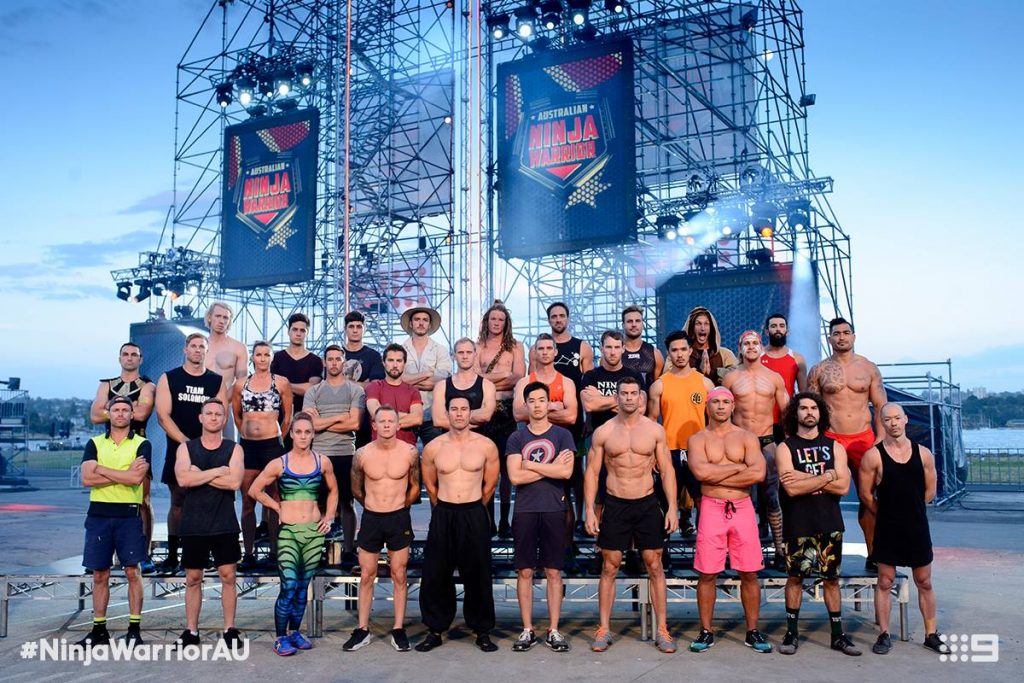 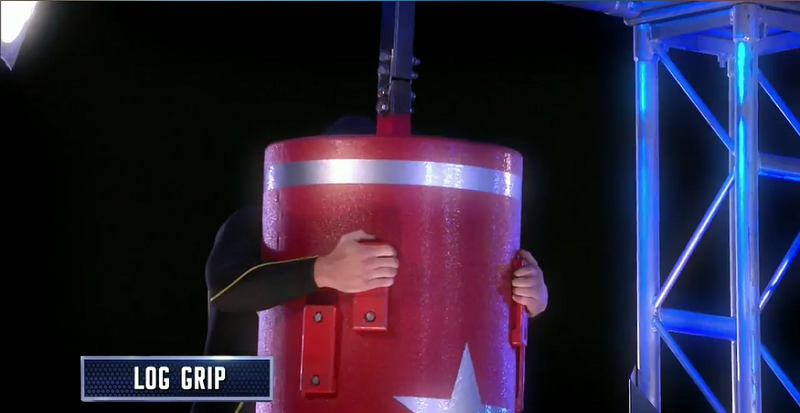 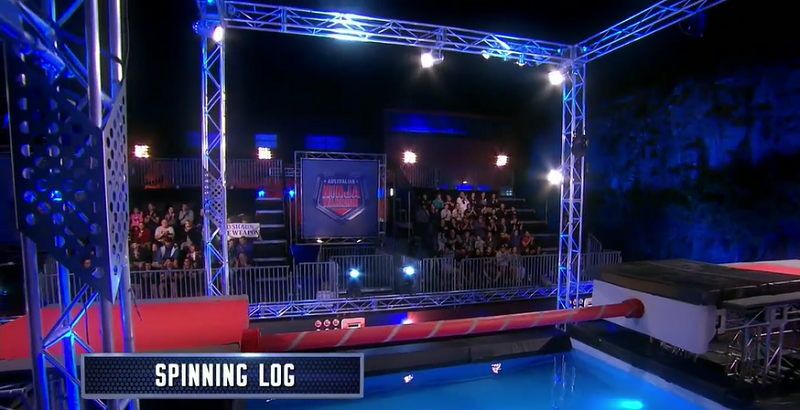 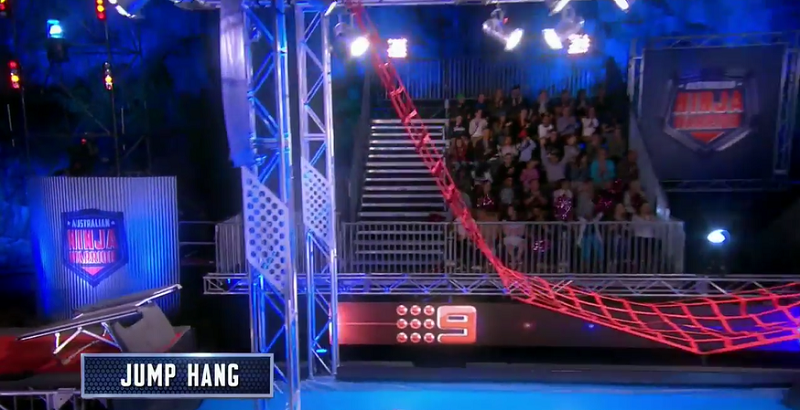 The fifth obstacle is nearly always a tough upper body obstacle.  Here is the Big Wheel. 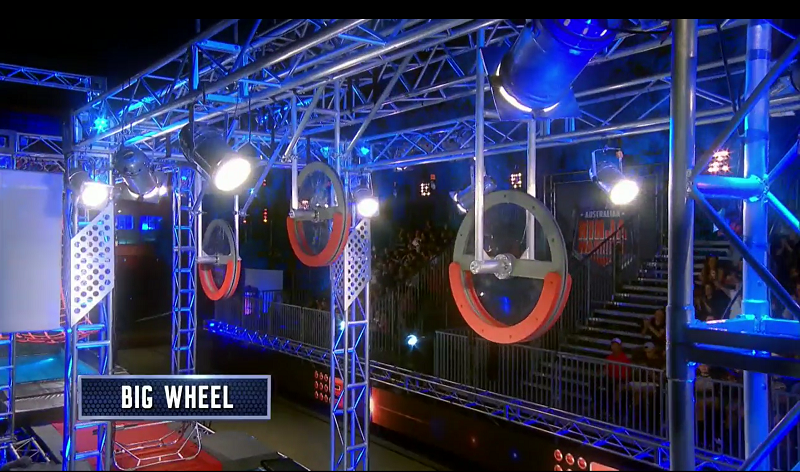 After making it up the Warped Wall, it’s onto the Swing Spikes. 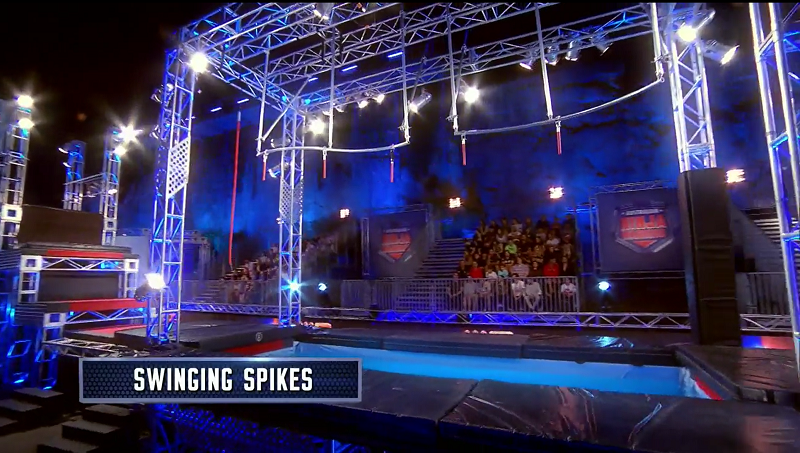 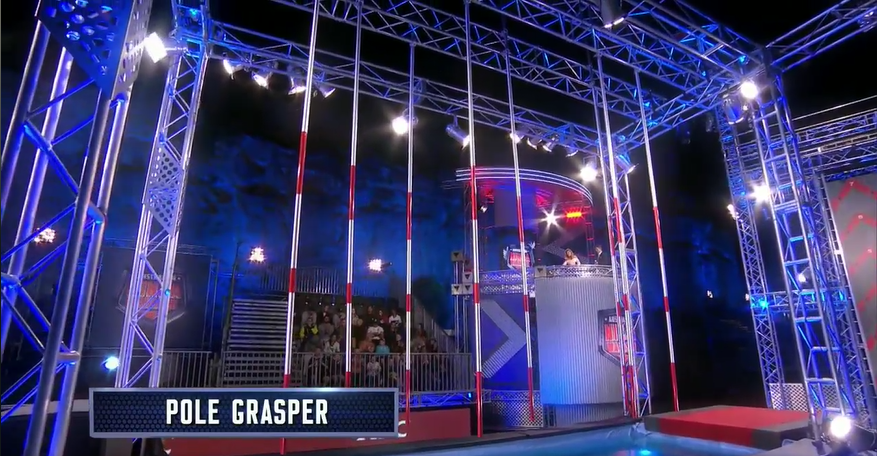 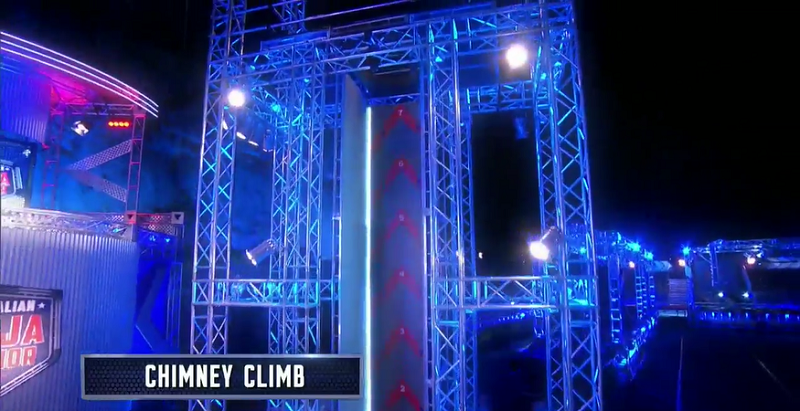 Only the Top 7 of this Semi-Final will make it through to the Grand Final.  Even if a ninja hits the buzzer… if 7 others make it there faster, then they’re out.  Harsh, but fair. 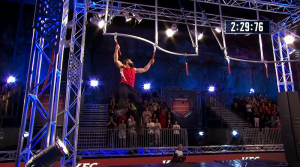 Adam Chatfield went first.  Adam had the best application video that I ever saw, and he didn’t disappoint. He hit the deck on the Spinning Log but climbed his way up quickly.  Huge run from Adam, smashing the Big Wheel easily.  His grip let out on the last Swinging Spike… he was looking super strong right up until that moment.  So close! 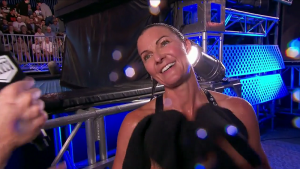 Janet Smith is Australia’s best OCR female athlete in Australia, she’s a tough cookie but the Log Grip got the better of her.  The jolts really are massive.

Warwick Draper went down after a fight with the Spinning Log

Kevin Robertson just had his foot slip on the dismount of the cargo net.

Caine Tsang took a massive fall on the Spinning Log but ultimately couldn’t rescue himself.

Zayne Wealthall is the bogan baker and he sprinted through the course. He didn’t even wrap his legs around the Log Grip and had no issues… he came off half way through the Spinning Log. 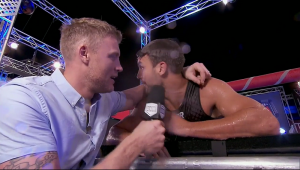 Beau Ryan barely saved himself on the Log Grip, he’s a huge dude and pretty much came off as soon as he hit the Spinning Log.

Dylan Pawson, the slightly quicker of the Parkour Twins.  I really liked that they swapped the order for the Semis.. super fair.  He slipped right off on the Log Grip but skillfully and quickly climbed back up… and then come straight off on the Spinning Log. 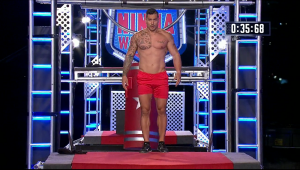 Francis Cullimore is the biggest dude ever, just massive, but he’s really super strong. He surprised us all during the heats hitting the buzzer, amazing for such a big guy. He sprinted across the Spinning Log without any issue at all.  Quick as! He came off on the transition to the last Big Wheel. 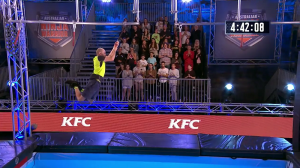 Sam Goodall the super tradie probably has the best backyard ninja course.  Killed the Spinning Log, but banged his head hard on the Big Wheel.  He hung there for ages while he shook that off, but put a huge effort into the Big Wheel and smashed it. He just grabbed the tip of the Warped Wall… he did better in the Semis than in his heat.  Awesome work! He came off sideways on the dismount on the Swinging Spikes.  Everyone thought he was disqualified but somehow landed completely fine.  On to the Pole Grasper, which he didn’t do easily, but fought through. he looked wreaked but was smashing it and got further than anyone else to this point.  He finished the course in 7:51.

Aurielien Aupport is another big unit but smashed into the Spinning Log. 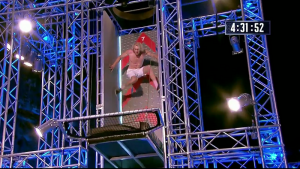 Ben Polson is 6’4″ and an amazing athlete.  The Spinning Log didn’t even move for him, the dude refuses to get wet. Nothing was too much for him and he hit the buzzer in 4:40.

Farkas Pungar was thrown off the Spinning Log in a spectacular fall.

Luke Williams, owner of SA Basecamp, hit the buzzer in 6:07.

Tom Hazell, sped through the course to hit the buzzer at 4:41. One second after Ben Polson’s time.

Brodie Pawson, the other Parkour Twin, also came off in exactly the same point on the Spinning Log… weirdly, they’re fast and their balance is amazing.. sucks for them.  I had high hopes.

Daniel Weston, Tarzaniel, is 19 and has a massive spring in his step… nothing was a problem, he skated through with ease. Swinging Spikes were barely a thing… and he looked super comfortable on the Pole Grasper, but his dismount was super messy and his trailing legs hit the water. 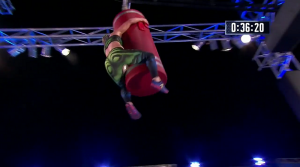 Celeste Dixon the aerial gymnast struggled to wrap around the Log Grip and so didn’t have enough space for the dismount. 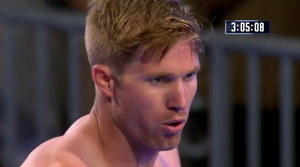 Ryan Solomon smashed the whole course easily, hitting the buzzer at 4:44.  So good to watch! 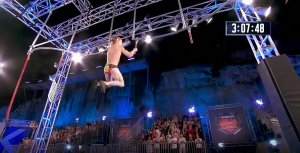 Crowd favourite Jack Wilson was absolutely killing it when his foot just barely touched the water on the Pole Grasper.  So disappointing but he took the bad news like an absolute champ. 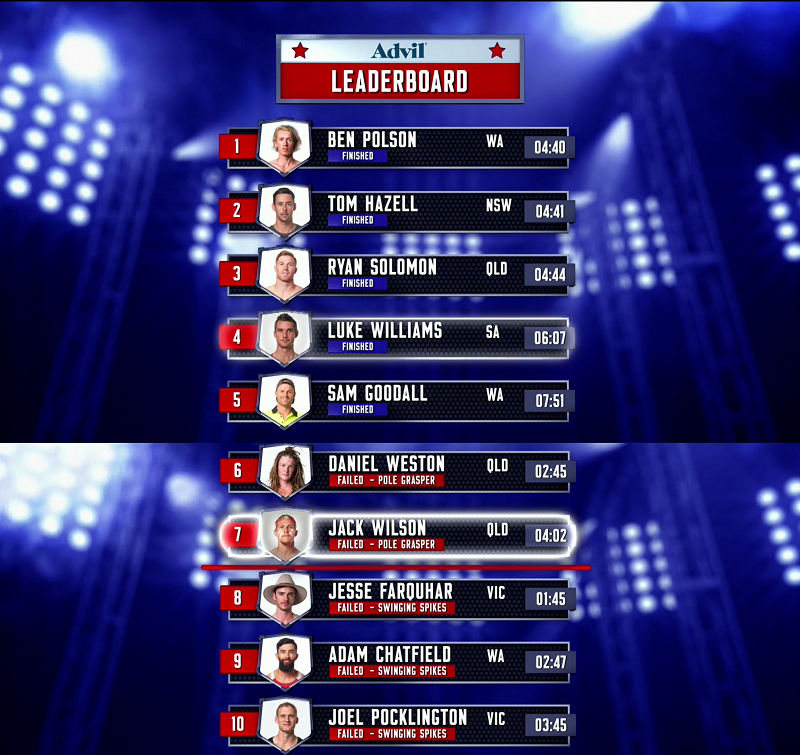