Welcome to our Australian Ninja Warrior episode 5 recap!   We’ll be recapping each episode to make sure you get all the deets and stats to make your ninja-heart swell with enthusiasm.  We’ve been waiting a long time for this, and we’re very excited to share this moment with you all. 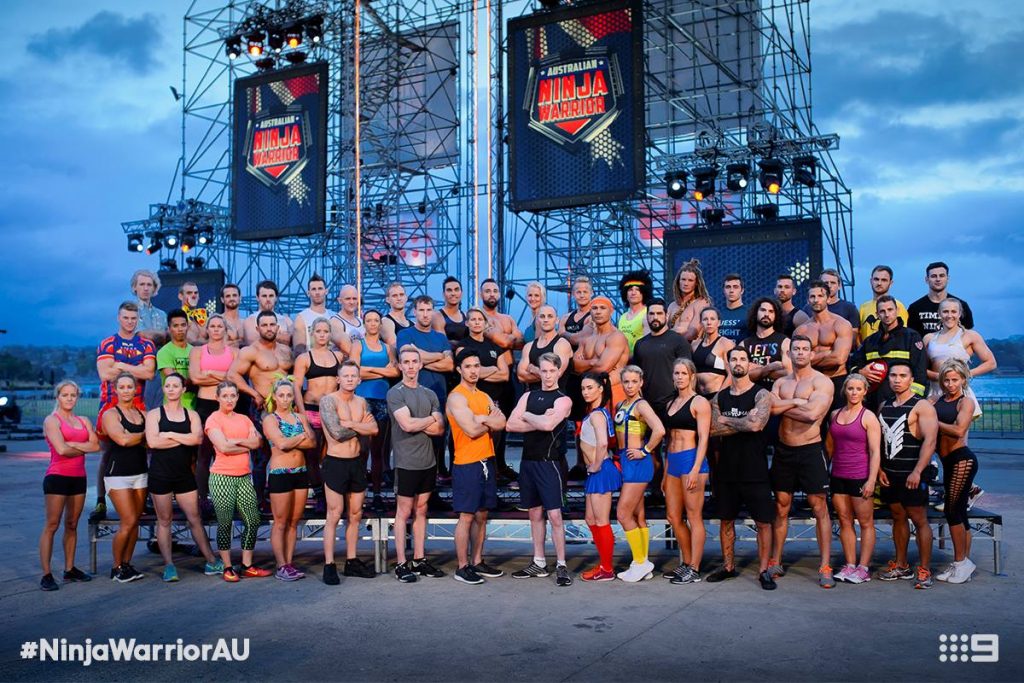 The 2nd obstacle is always a jolting obstacle. Tonight is the Pole Rider. 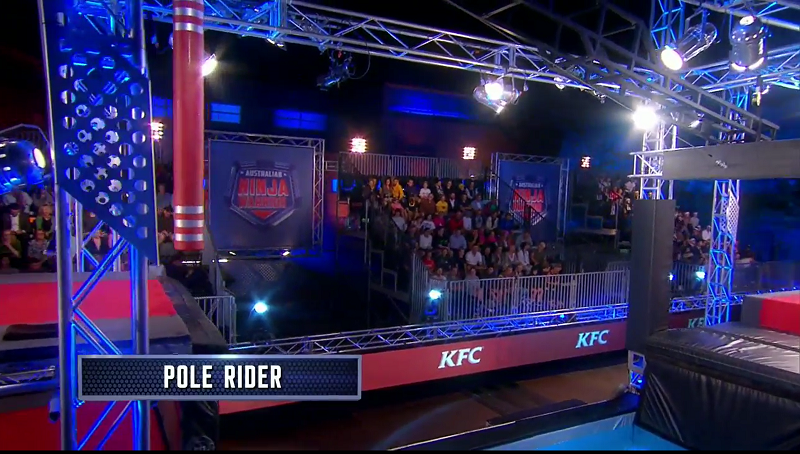 There is always a balance obstacle third, and it’s the Bridge of Blades.  It rotates so if you’re off-balance or too slow, it’ll literally push you into the water.

If you get up to here, you’re doing better than 60% of the competition… and so next is the Rings to Cargo Net. 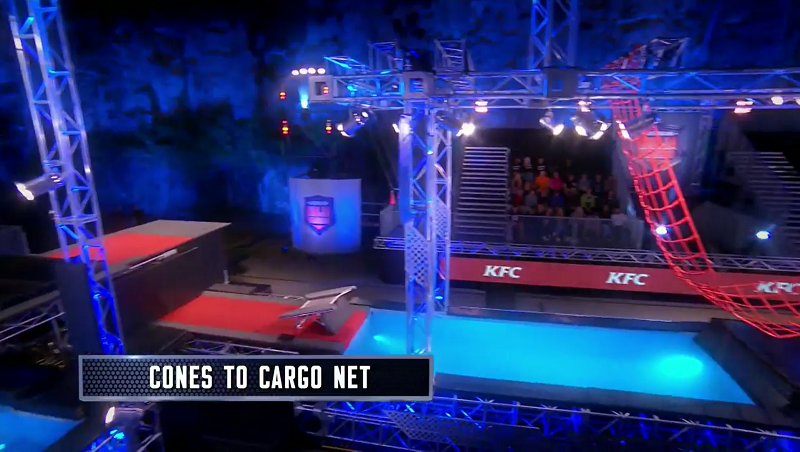 The fifth obstacle is nearly always a tough upper body obstacle.  Here is the Swing Cycle. 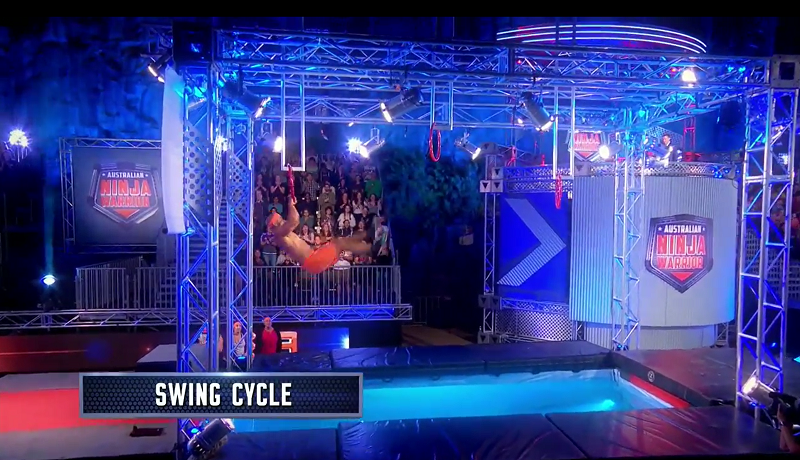 Personal trainer and former fireman Aurelien Apport is 100kgs of pure muscle.  He was doing really well… his body control is great for a big unit.  He smashed the course… I kept expecting him to fall but he just refused to. I just wasn’t expecting the first run of the night to be successful. 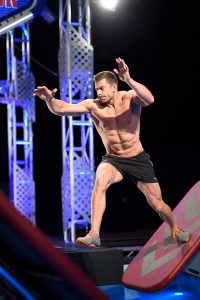 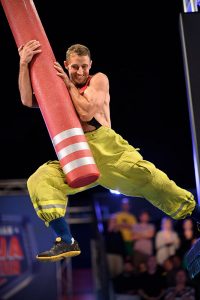 Lachlan Dansie left corporate tax to become a firefighter.  He got done by the Pole Climber – didn’t get enough momentum. 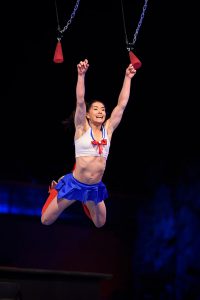 Bodybuilder and pole dancer Jassy Chia did really really well.  He’s light and strong, her power to weight ratio is amazing. She just didn’t get the spring off the trampoline to the cones.  It’s tough. 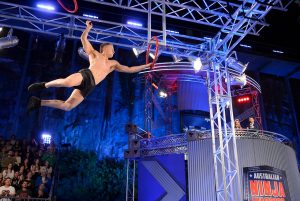 Baker and gym junkie Zayne Wealthall is a bogan firecracker – he’s not tall, but man.  It was one of the fastest runs I’ve ever seen.  He took the full 3 attempts at the Warped Wall, and just managed to grab it with one hand at the last second.  What a ledge! Can’t believe what I just saw.

Olympic shooter Lauryn Mark got done by the pole rider.

Micheal Nass came off at the jump to the cones.

Matthew TImms the Timber Ninja smashed the whole course. What a gun! 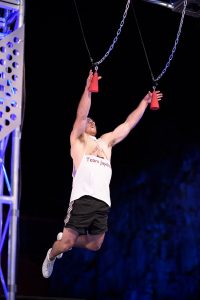 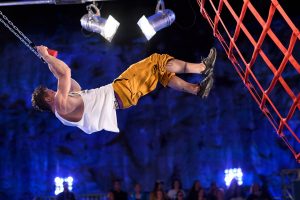 Nathaniel Irving fought off Non-Hodgkin lymphoma, now he and his brother Jayden are competing together.  I hung out with these dudes heaps, and they’re hilarious. It’s definitely more of Jayden’s wheelhouse… Nathaniel is a strong dude, but didn’t catch both cones.  Jayden was a total gun… he’s hilarious and a pure entertainer… and smashed every obstacle too easily.

Landscaper Jamie Brown is a tough chick. (Couldn’t find any photos of her… she really is a ninja). She got caught on the pole rider.

Crissi Carvalho hit the platform at the end of the pole rider, but got dragged back and into the water.

Alex Bigg is freakin’ amazing.  His instagram is one of the most inspiring out there… but sadly he too got done by the jerk pole. 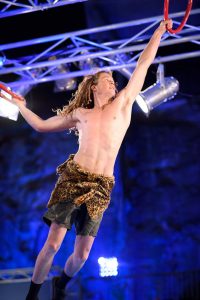 Young un’ Daniel ‘Tarzan’ Weston has no fear, he’s a bit of a happy crazy kid.. totally throws himself into life.  Threw himself into the course and smashed it in no time (well, technical in 1:29 seconds). He looked like he was having an absolute ball. 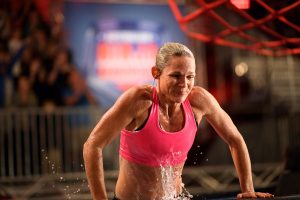 Special education teacher Laura Newton is one of the best obstacle course racers in Australia.  She did hugely well, she flew to the cargo net but only managed to get her fingertips to it. 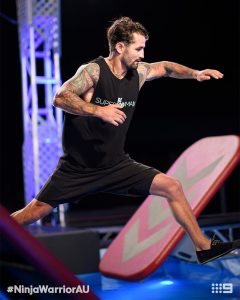 German MMA national champion Sebastian Kliesch also has an incredibly inspiring Instagram account too. His calisthenics is incredible. He got caught on the Pole Rider as well.  Total Ninja Killer right there.

Glen West had a great run but went out on the Swing Cycle.

Samantha Clarke didn’t get the dismount on the Pole Rider and was just left hangin’ around for a bit. 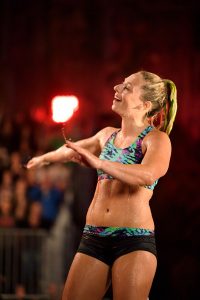 Former Olympian, handstand queen and yoga teacher Stephanie Magiros (the Munkin Ninja) is tiny, but is super strong. Her quads are epic.  She was quick and just handled the course with a heap of skill.  She made the grab to the cones easily along with the net. So great to watch! I had chills. She just couldn’t hold onto the last ring… but such a great run! 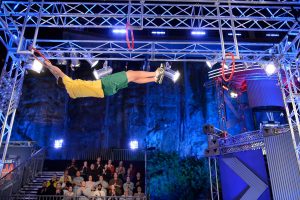 Fred Dorrington placed 3rd overall in the UK version of Ninja Warrior and runs a Ninja Gym with Ninja Comps in the UK.. easily has the strongest credentials of anyone in Australia. Which showed because he smashed it in 2:10. I can’t wait to see him tackle the semi-finals 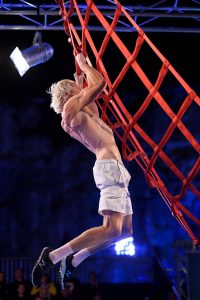 Gardener and DJ Ben Polson is a regular course smasher in the NCL anyone who knows him was pretty confident he’d smash it, did it in 1:19… and there was no surprises there as his run got Run of the Night.  Nice to see Dave and Mark from Perth Ninja Academy walking alongside in support. 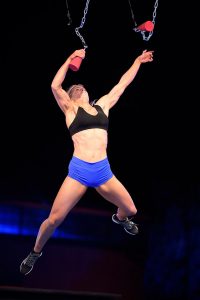 Occupational Therapist and Zoe ‘Titanium Woman’ Featonby had a really cautious approach and did the Pole Rider so well.  Great to see. Again the tramp caused problems and she missed the left cone.  Bummer.

Nikolai Babkoff was so close to getting through the Pole Rider, but just tipped backwards ever so slightly. Wet.

Nicci Barnes went down at the Bridge of Blades. 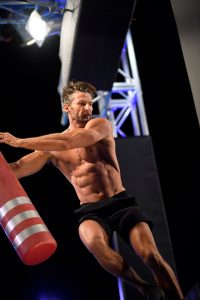 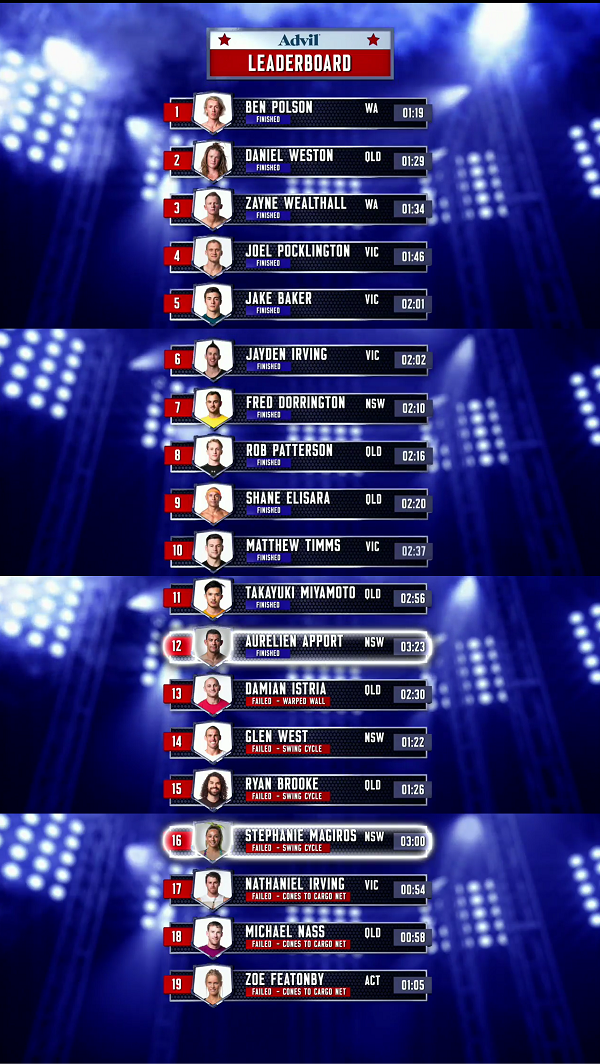 I found a few little Unseen Ninja Runs on the 9now website.  Have a squiz: