Welcome to our Australian Ninja Warrior episode 4 recap!   We’ll be recapping each episode to make sure you get all the deets and stats to make your ninja-heart swell with enthusiasm.  We’ve been waiting a long time for this, and we’re very excited to share this moment with you all. 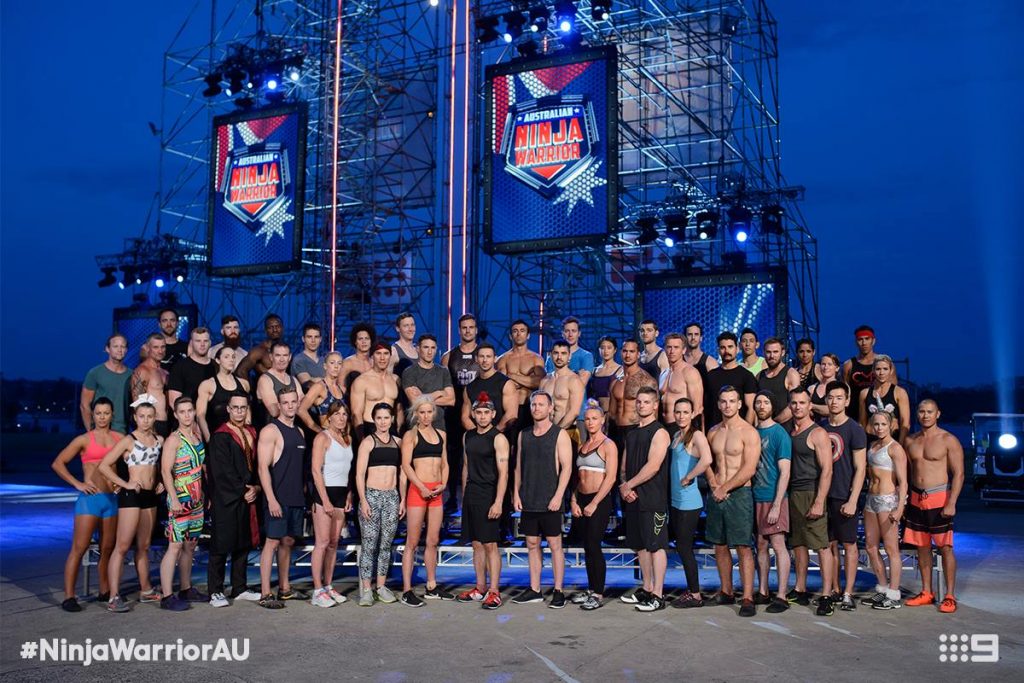 The 2nd obstacle is always a jolting obstacle. Tonight is the Slide to Box Jellyfish. 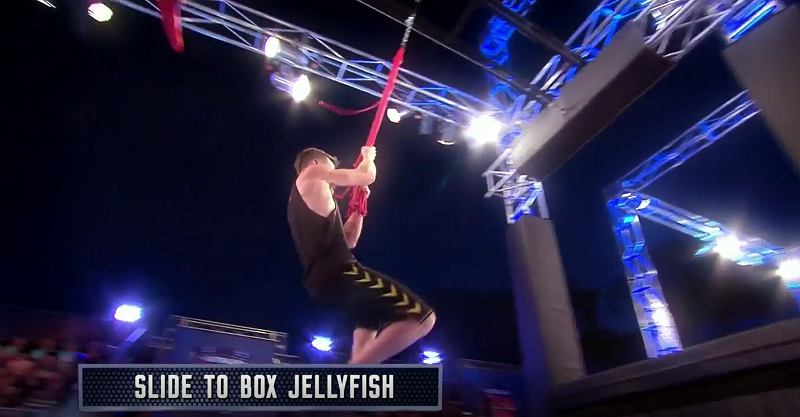 If you get up to here, you’re doing better than 60% of the competition… and so next is the Rings to Cargo Net. 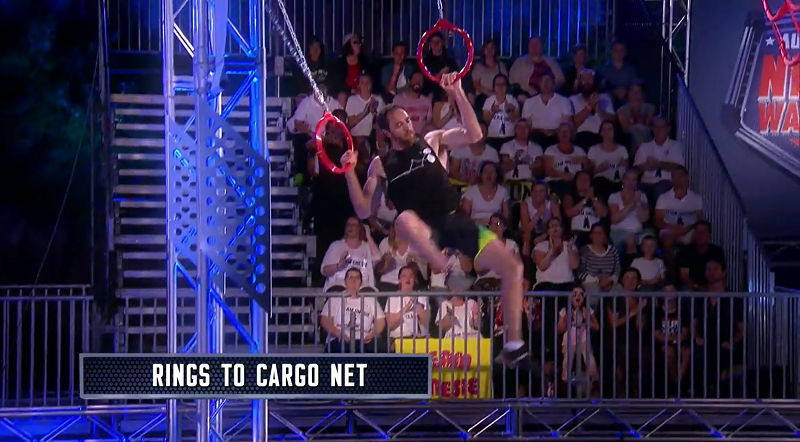 The fifth obstacle is nearly always a tough upper body obstacle.  Here is the Pipe Climber. 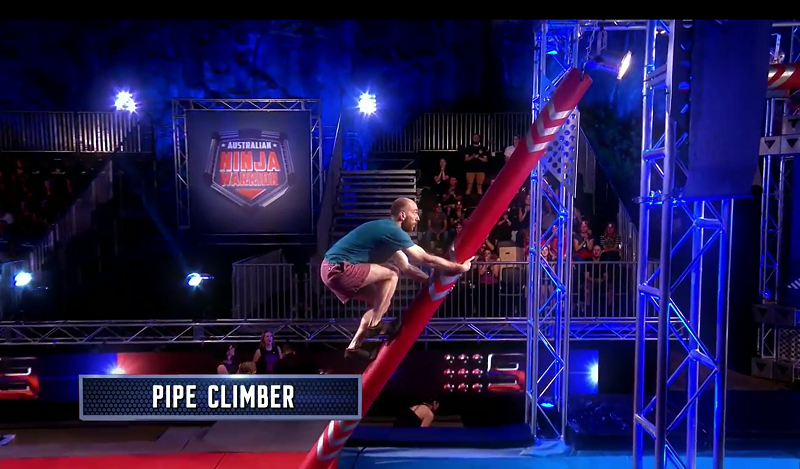 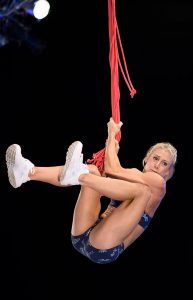 Sarah Bartlett is a calisthenics beast!  She is so strong and has amazing flow.  Her grip and body control were totally evident in her run.  She got caught up on the on the bungee cords though, had like a trillion close dismounts but alas, just wasn’t to be. 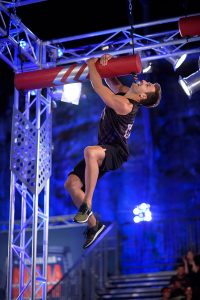 Beau Ryan is a massive dude and NFL legend.  We ran at about the same time.. and he totally dwarfed me. He complete spun out on the bungee cords, but somehow made it through. He got to the Pipe Climber, but couldn’t make the transition to the 3rd pipe. It’s a tough obstacle, especially if you’re huge. 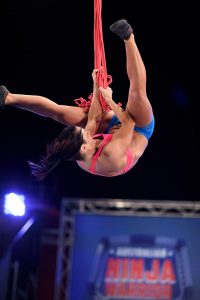 Jenna Douros is such a lovely and supportive inspirational ninja.  She had so many close saves… and she just kept going!  She’s not tall though and just couldn’t make the massive leap to the cargo net from the rings.  Such a great run!  Loved to watch. 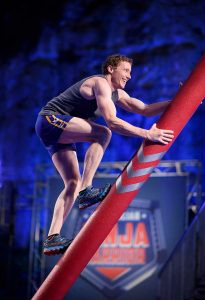 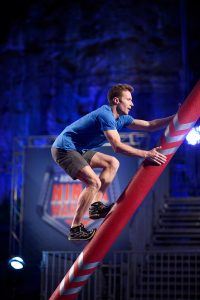 Ben Cossey and Lee Cossey are hilarious! They’re that classic example of the super sporting family that continually pushes themselves way further than an external pressure could.  Ben’s run was super super entertaining, he took all of it easily.  Literally all of it. Lee was amazing.  He ran quite a bit later and just smashed it to get the Run of the Night.  These dudes are incredible.

Run of the night – Lee Cossey

Wendy Levy, Sal Hassan and Tina Smith all got smashed by the Slide to Box Jelly Fish.  It’s a super tough obstacle. 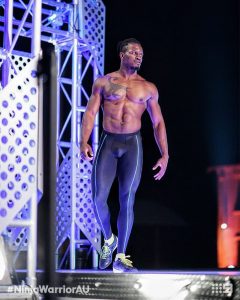 Enzi Dube was crazy strong.  Backstage we all assumed he would absolutely crush it in 10 seconds.  His standing leap is the biggest I’ve ever seen… but got really out of sync on the Quintuple Steps. and splashed at least 99% of the crowd. 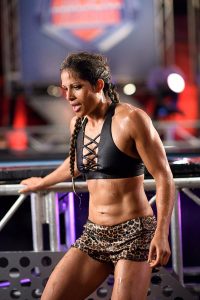 Jolene Kelly is super fit, but took a huge spill on the bungee cords.  She only managed to grab a couple of the bungee cords, which makes you drop so much further down. Disappointing, I really thought she’d go further, but she’s so super strong I have no doubt she’ll be back next year and I literally can’t wait. 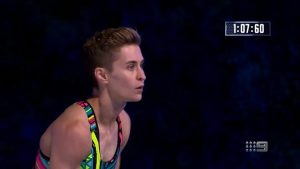 Laura Edwards looked amazing in her onesie and looked really strong… she has all the muscles.  She came to a complete stop on the Rings to Cargo Net… and somehow managed to restart her run and get momentum to make the huge leap… but again,  she didn’t have the height or the reach to grab it comfortably. 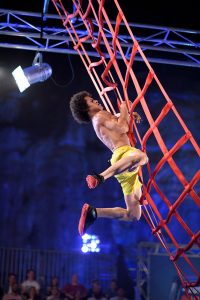 Travis Edwards the Afro Ninja  is so energetic. He seriously powers up any room and any crowd with hilariousness and charisma. He was pretty spent by the time he got to the Warped Wall, and he had the least grab of a Warped Wall I’ve ever seen.. but he hung on and managed to scrape himself to the buzzer.  Great to watch! Excited to see him in the Semi-Finals.

Willow Firth does incredible work with indigenous women, I totally believe she has absolutely changed lives in the dessert.  She was on the bungees for ages and ages and got so close to the edge but just couldn’t get her momentum forward enough. 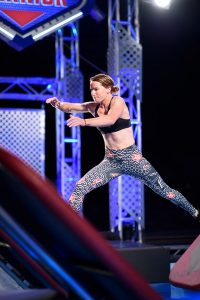 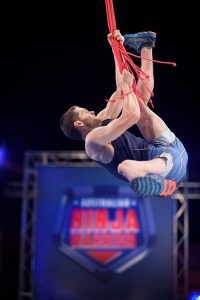 Tom O’Halloran is best friend of Ben and Lee Cossey and is part of the Rock climbing Quartet who are all champs. He kinda struggled through the early obstacles, but as he went he just got stronger and stronger. He killed the course messily, but so strong. 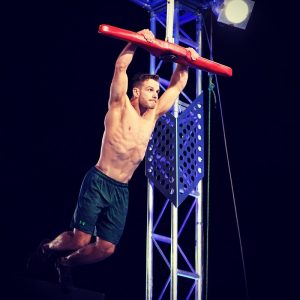 Rob Sandover and Warwick Draper are both super strong in completely different ways.  Warwick is an expert canoer.. which a massive wingspan while Rob has every single muscle… times 10. Both crushed the course and finished the course. 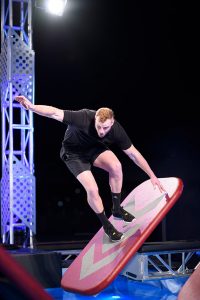 Adam Cooney is an AFL Brownlow medalist… the perfect Ginger Ninja… except he too is a freakin’ massive dude. Gave us all heart attacks on the bungee cords but managed to get through, only to get done by the Bridge of Blades.  He stepped way too high on the first step. 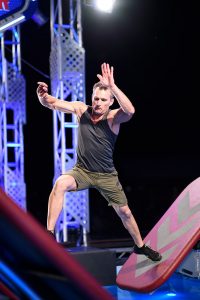 Paul Cashion is deaf with a really strong cricketing background.  Before I even saw this episode I saw the public outrage about his run.  He got DQ’d on the Quintuple Steps as his foot slightly touched the water but because he was deaf he didn’t even realise he was out. It was super awkward and everyone felt a bit crap about it.

Alex Matthews is a total dude.  I spent hours just talking and mucking around with Alex while we waited. He’s so strong but totally unassuming. He had a broken neck from a car accident but now smashed the course like it ain’t a thing. 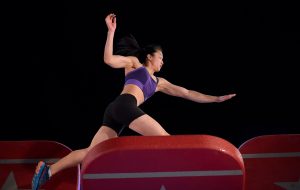 Andrea Hah is super sweet and totally shy.  She was amazing and her run was incredible to watch…. I got goosebumps when she walked onto the stage to start.  She was so deliberate and considered with every move. Unfortunately she just couldn’t top that Warped Wall, otherwise it was a pretty flawless run. She made the Semi-Finals and I think all of Australia will be watching! 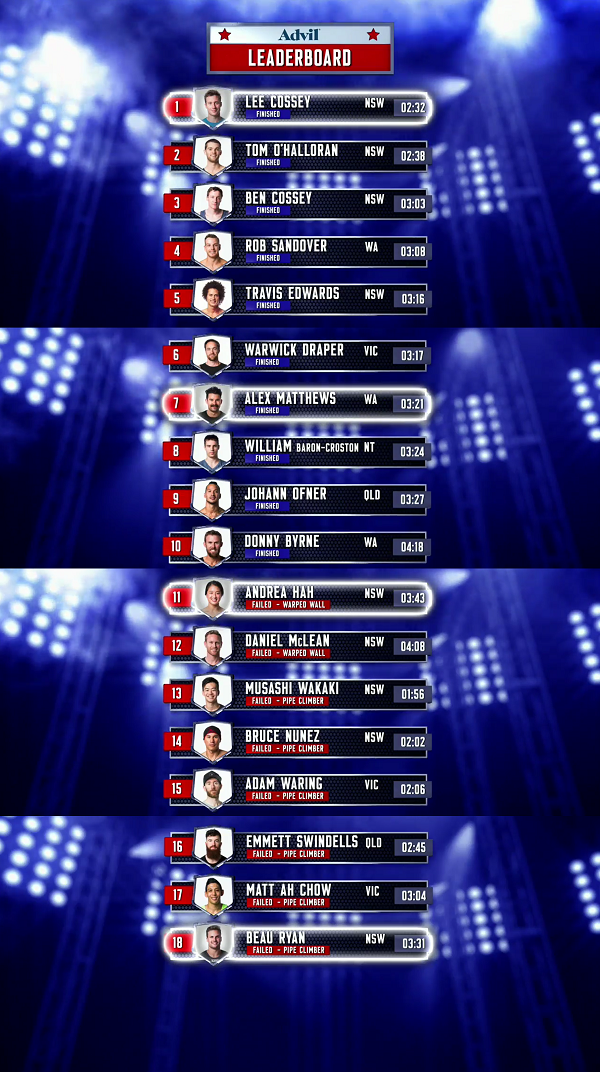 The show ended with a tribute to a truly great competitor who died on set of a music video.  It was so ridiculously tragic.  Here is a little tribute I wrote when I first heard about it… I literally couldn’t believe the news for hours.  In the leaderboard above you can see that he made it through the course.

Johann Ofner's infectious energy and kindness made a great impact on all who worked and trained with him during his time on Australian Ninja Warrior. Rest in peace Johann.

← AusNW is on tonight at 7pm! See these new obstacles!
→ Ninjas in Training: Jaze Dubois
Register or Login